At its 2013 Intelligent Buildings Conference, Realcomm offered this reference architecture to illustrate how the industry was evolving. On June 17th the Industrial Internet Consortium (IIC) formally released its Internet of Things Reference Architecture Document.

“Hats Off” to the Realcomm team and to the Intelligent Buildings industry that they represent. They nailed the architecture for the Buildings Internet of Things (B-IoT) about 24 months before the big IT brands at the core of the IIC — Cisco, Intel, IBM, GE — offered theirs. Read my posts on the IIC reference architecture and how the IIC built upon the foundational work done by the open-framework intelligent buildings industry. I’ve juxtaposed the two reference architectures in the slide below: 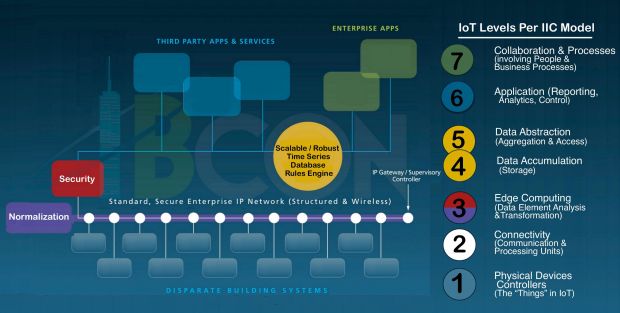 Tridium was acknowledged by the IIC spokesperson at the October 2014 IoT World Forum. And, as John Sublett, CTO of Tridium said,’  “When you think about what an IoT architecture is, it is really about device-to-cloud. Today while we have presence in all those layers, our strength is right in that middle tier.”  That middle is ‘Edge Computing’ — a little confusing, only proving that buzzwords and metaphors are slippery things. The IoT is just a new name for the decade or more of work on the part of the open-framework building automation and control community toward bringing the physical world of operations technology (OT) into the digital world of information technology (IT).  This community was ahead of the IoT curve in 2012/2013 when Realcomm published this graphic, and its been moving fast in bringing Buildings IoT to mainstream building design/construction/operations&maintenance markets today.

One aspect of the Realcomm/IBcon graphic that is particularly well rendered is the way the ‘Scalable/Robust Time-Series Database Rules Engine’ is in the big sunny, yellow circle at the center. There are complementary value-add app’s and services orbitting that center. In the B-IoT workflows that I’ve written about over the last year, that engine defines the center of an ecosystem. The PI System from OSIsoft and SkySpark® from SkyFoundry could fit in that yellow circle. The Simple Measurement and Actuation Profile (sMAP) born out of DOE-funded research at the University of California, Berkeley, is forming its own ecosystem. Trendr from Building Robotics is a commercially available product based on this effort. I’ve interviewed customers and value-add providers from each of these ecosystems about the workflows that they support. Here are links to those stories organized by the ‘Things’ they control:

As is clear from this list, ecosystem partners play a big role in the long value chain between the broad goals listed on the original Realcomm image to measurable results. According to Michael Porter’s theory of value chains, the longer and more complex the chain, the more advantage goes to that ‘local’ provider closest to the customer. So the rules engine may define the ecosystem, but the value-add providers hold a lot power. Today there is a big, multi-faceted job in reducing friction in the sharing of data along the unified workflow from Levels 1 through 7.  This article from SkySpark partner BASSG Ltd. presents more detail about those data challenges.  I’m working to get more of these workflows documented. 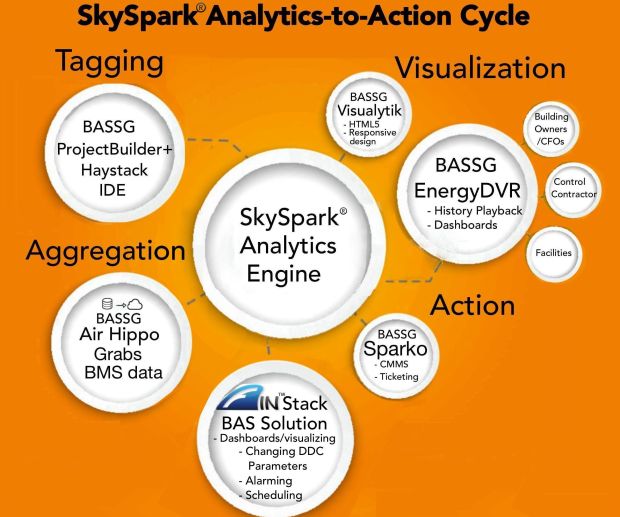 Four major data challenges are inherent in forging a Buildings IoT platform: aggregation, tagging, visualization and triggering the right action. The SkySpark Ecosystem, including BASSG, has solutions for each of these phases delivering a robust ‘whole product’ platform for building operational analytics.

Despite all the progress, the wider world seems to keep echoing that IoT for Commercial buildings is futuristic. There’s either a deaf ear or a failure to communicate to even our own wider industry.  Just this week – posted August 10, 2015 – the editor of Air Conditioning, Heating and Refrigeration News reported that commercial HVAC industry was getting ready to catch up with residential HVAC in the IoT.  He interviewed exec’s from Schneider Electric, Honeywell and Trane and knitted a story about all the reasons the IoT for commercial buildings is years out. I wonder why that is?